The bluebird of happiness....

May 4.    And the misery of covid....  Its been a rough latter half of April. Easter came, and with it, covid. One struggles to figure out where it was picked up, whether whilst shopping the week before Easter, although all the usual precautions were taken; or was it brought from Toronto by our Easter guest? Today, finally, I think I really have it on the run. Don't mess with that beast...I can well see how it would knock out an older, frailer person.

Spring has definitely sprung, and I refused to be trapped indoors. It took a lot of gumption, but every day I bundled up, and was out for at least a bit, checking out the sprigs and sprouts, and breathing deeply.

The duck couple on the pond, have not been seen for the last few days, but for a while there was a regular bathing session by the female, early morning and at dusk, the male keeping close by her. We think they have a nest secreted back in the bush on the rough east side of the pond.

A phoebe pair is determined to build a nest up over the back door, and we have given up trying to discourage them. They'll just have to learn to live with us!

The bluebird pair that showed up earlier, have, after a lot of discussion, decided on my nest box!! I am thrilled, and we have set up a telescope at the window so we can watch the proceedings. For days the female was diligently collecting nesting material, the male seeming to watch in puzzlement, and he would often go in the nest box after she'd made a delivery, like he was checking up. Apparently nest building is the female's job, and his is to 'supervise'! At times the female would come to the box, her face full of stuff, and try to get in the hole, but the bits and sticks she had in her beak were too wide. She'd hang on the front of the box by the hole for a moment, after trying unsuccessfully to get in, then fly out in a small circle, and charge the hole! Somehow, she managed to get those beak-fulls in, then out she'd come and go for another load. He would sit on top and peer over the edge, watching the proceedings.

We tied out a mesh bag of wool roving on the branch of an oak tree, then placed a trail camera there to see who was getting nesting material. The chickadees and nuthatches found it, but the bluebirds have not, so far. 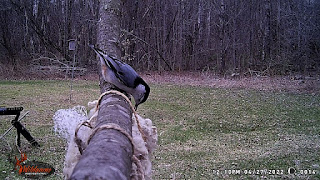 A few days ago, I got the winter accumulation in my compost bin dug out, watered, and layered back in. There was an icy chunk in the middle that I was able to break up with the garden fork, and now my compost thermometer is showing a rise in temperature, from 58F the first day, to 62F today, and the outside temperature is just 44F. 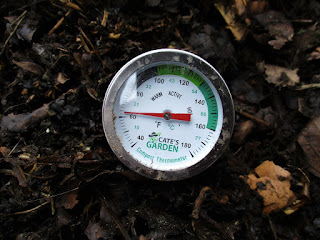 Last fall Hubby put the bagger attachment on the mower, and did a final grass cut and collected leaves. He filled the third compost bin, layering it in with water. Today I dug it out, and found that it is somewhat dry, and probably needed more green stuff to get it cooking. It hasn't done much composting, but can be used to mulch around my transplants when they go out in June.

My onion sets arrived in the mail yesterday, and I've had notification that my blueberry bushes are on the way, so got busy and prepped their planting holes. There happened to be one big rock right where I'd spaced the holes out beside my haskaps, so with the help of a pry bar, we got it out. I added lots of compost to the native soil in the planting holes, and will mulch with pine needles. 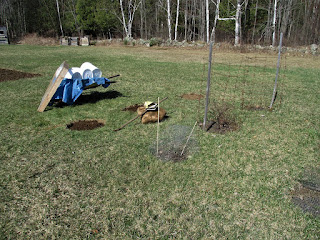 The haskaps are loaded with buds, and with the forecast calling for sun and warmth over the next week....Things will be popping.  The garlic is going strong now, the hardware cloth is off, and rocks placed to hold the leaf mulch down. 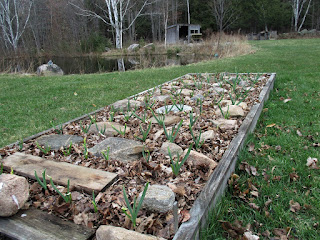 Today, the sun is finally starting to break through after a few days of cool temperatures and overcast, rainy conditions. Once the temperature reaches 50F, I will be taking my seedlings out onto the verandah to start their hardening off. There will be a few days of lugging them in and out morning and evening but after a week or so, they'll be moved over to the cold frame where the lid can be lowered and insulating blankets put over them if needed. 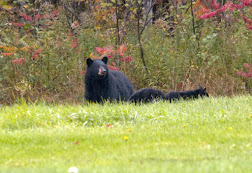 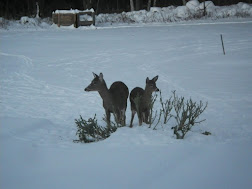 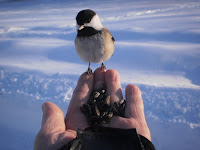