.....with a vengeance! We are hiding out inside this afternoon. Huge cumulus clouds are tumbling up into blindingly white thunderheads in the sky, and thunder is grumbling and growling around us. The sun is shining, it is hot and humid. 28C (82F), feeling like 40C (104F). We were out early, came in at 11 and back out at 1. Shortly after 2, I'd had enough! The deer flies are brutal, and no matter how well you are covered up, they still get you.

We had a “gulley washer” of a rain event yesterday morning, and puddles formed in the pathways of the field garden. I made elevated beds to plant in, so it did not cause any problems. We were in town and missed the downpour. On the way home along the highway, we went from dry pavement to wet pavement, and as we came up the hill, it was riddled with washouts and a big wall to wall puddle had formed in one of the dips.

I have something chewing off seedlings as they emerge, leaving little stubby stems. The critters, ...earwigs I think, ... have selective appetites, going for cucumbers and nasturtiums, but not the marigolds right beside them. They have had a field day in my carrot patch, and I've had to replant. They like pak choy, but not lettuce right beside it. They have nibbled on my baby turnip and broccoli plants as well. Any white stuff visible in the pictures is a dusting of Diatomaceous earth.

We have certainly not been lacking in moisture this spring, as at this point in June, we have had a total of 4 ¾ inches of rain. The temperature has been riding a pendulum, some nights as low as 7C (45F), some days not even getting into the 20's C (68F), then some days like today...brutal. Our favourite weather forecaster says this weather pattern is going to continue for a while. Can't believe we had a small fire on Monday morning to take the chill and dampness off!

I was playing with the settings on my little Canon Elph, and this was called “vivid”. Appropriate for the pansy faces! 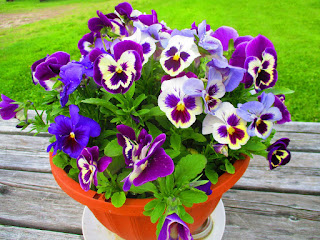 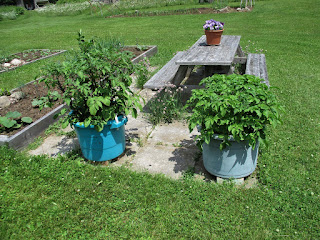 I planted my squash seeds along the side of Bed #1, and will guide the vines to grow out across the patio. Once they get going, we'll move the table. 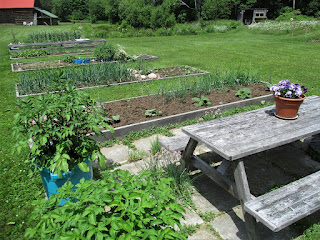 Cucumbers are across the north end of the field garden, where they will hopefully climb the new fence trellis. There is a double row of glads up the west side, the original 18 or so corms I purchased 5 years ago have procreated into over 70 corms. 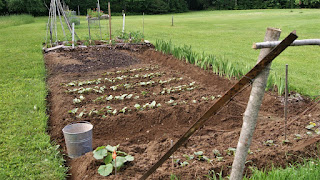 
Half of the middle part has been planted in double rows of bush beans, the other half waiting until July, when I'll plant another crop. I don't want to have to process so many all at once. There are 6 brandy wine tomato plants across the width and beyond that, the bean tepee and a zucchini. The Scarlet runner beans have not come up. I am disappointed. I got them at the seed exchange, along with some arugula seeds which also did not germinate. 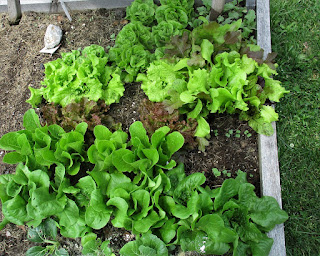 The lettuce and greens patch, as always, has jumped suddenly into high gear. There always is not enough, or way too much! 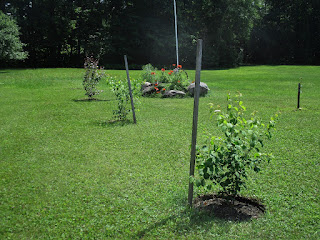 The two plum and one crab apple tree in this row were dug up as tiny sprigs at a friend's home, and have grown by leaps and bounds. 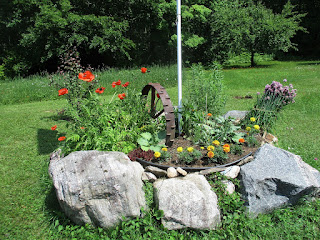 Beyond them, the Flagpole garden is abloom with my perennial red poppies. We recently had a day or so of intense wind, and they are bowled over a bit, but still beautiful. 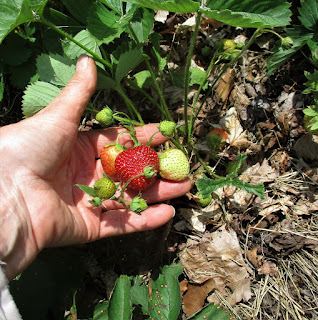 There will be a handful or two of these beauties. I can see which plants are which now, and plan to root runners from the spring bearers and dig out the ever bearers. 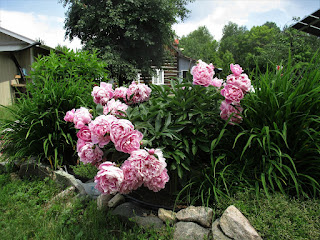 My beautiful peony is bowed over with blooms. It is tied up, but the downpour yesterday really weighed down the blooms.

The trail cameras have captured a new fawn, 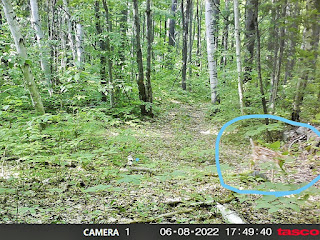 and a cow moose with this year's calf. 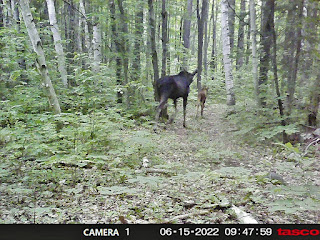 The next picture taken was blurry, but showed the cow having a good rub on the tree she is beside....the tree that the camera used to be on! It would not have survived! 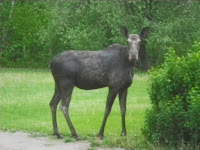 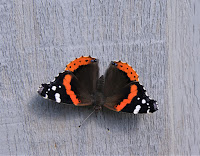 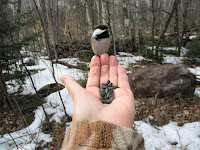